How Monsters Were Born

Hey guys, how is everybody?

Now that the game has been heavily improved over the time and is available to all smartphone users, we can look back a bit.

The quirky monsters from “Monster Buster: World Invasion” have conquered the world, not only by invading our universe, but also by winning the hearts and minds of the players. Some of them might be a little scary, others can be funny, but all of them are really cute in their own way. Obviously, they were born this way not without the help of our amazing artists.

What you see in the game is almost a living, breathing creature, but before it becomes one, it goes through multiple creative stages. Let’s briefly discuss them all.

Sketching and painting the concept art is the stage where an artists actually thinks of how the specific monster will look like, what visual features it will have. Is it big, small, angry, smiling, red, green, does it have horns, how many eyes does it have, how many arms, fingers or other body parts? These are all the questions that are answered in this stage. This stage often also includes the creation of blueprints. These are all the views (or projections) of a character, necessary for a 3D modeler to know how the monster looks from all sides, what its exact proportions are and so on. During our creative process, we’ve even made a video of how the blueprints are made! Have a look.

When the concept artist defines the look of a monster, a 3D modeler takes over. The modeler grabs the blueprints and recreates the character in 3D space. A 3D model is a digital object that consists of polygons (triangles and quads), and in computer and mobile games the polygon limits are always pretty low. So the modeler needs to distribute them to stay under the limit, but depict all of the necessary details at the same time. That’s why the more detailed areas have a denser polygon mesh. 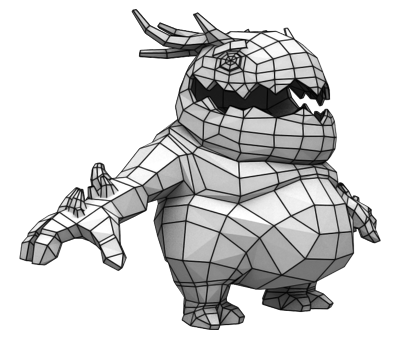 After modeling the mesh, it still lacks color and all the small details that couldn’t be recreated without using too many polygons. So, the model needs to be textured – an image has to be created that is mapped onto the model to give it color. To be able to map that image, the modeler has to prepare the model for texturing by mapping the 3D model into 2D space. This process is called unwrapping and consists of cutting the model into separate pieces and flattening each of them. When the model is unwrapped, it’s ready for texturing. 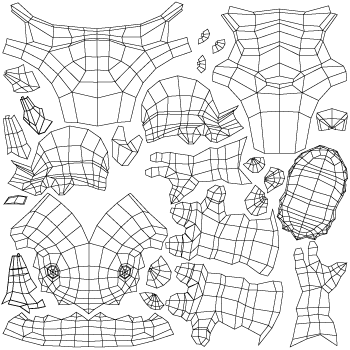 Texturing is done by drawing on top of the unwrapped representation of the model. The artist uses the concept of a monster to know what colors and details to use, but has to repaint everything onto the 2D texture space, where the model has been unwrapped. After creating the texture, it’s automatically mapped onto the model and all the details fall onto the surface of the model. 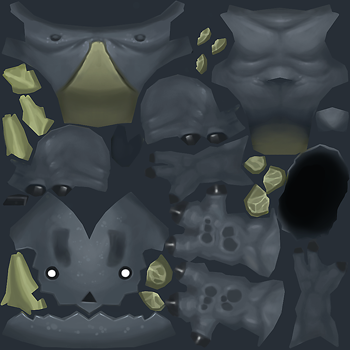 When the character is modeled and textured, it’s ready to get some moves and grooves. In “Monster Buster: World Invasion” each action of the characters are animated, even the idle state (which is, well, technically not an action)! So, the melee and ranged attacks, getting hit, floating in the portals – everything that the monster does, an animator has to animate. Each monster has a different mood and body shapes, so each of them has unique movements. Obviously, animations add a lot of character to the monsters, and complement their basic looks. Only with animations they actually become who they are.

IMPORTING AND SETTING UP

The final step is to import the animated monsters into the game and set them up. We’re using Unity for development, so it helps a lot with importing, but there’s still quite some work to adjust the size of the monster, set its name, default abilities, assign shaders and so on. But when all of that’s done, the monster becomes a character of the game and you can find it and play with it! 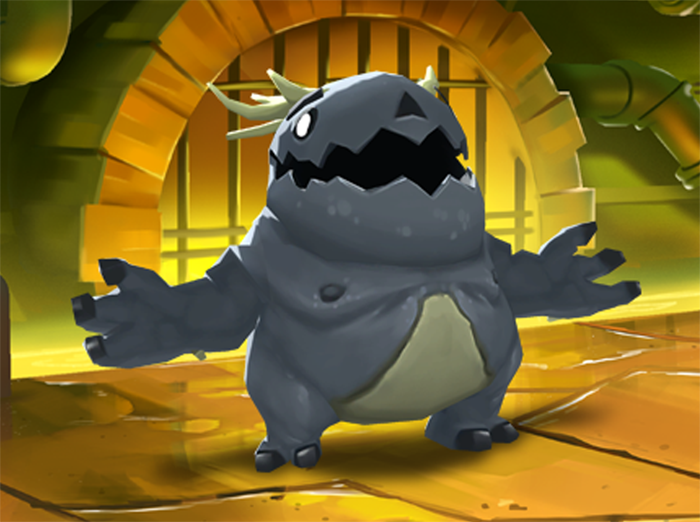 Let us know in the comments if you like this post. There’s so much more to tell, so tell us what more you’d like to hear about!

Thank you, and keep busting monsters!
Tag of Joy.